Little Gold “On The Knife” LP

“… Christian DeRoeck spent most of the past decade writing, touring & recording with the Brooklyn indie/punk band Meneguar. In late 2006, He and bandmate Jeremy Earl decided to combine their bedroom recordings and release them together, as Woods. They recorded two albums together and toured the US and Europe. In early 2008, for several reasons, Christian left both bands.

He spent the summer of 2008 working as a carpenter in eastern Long Island. Inhabiting a tiny basement room, he began working on the songs that shape On The Knife. In the fall he moved back to Brooklyn and teamed up with his old friend, multi-instrumentalist Dylan Edrich (Chain and the Gang), and Little Gold was born.

Recorded to tape at Emandee Studio in Brooklyn, On the Knife is a deeply personal take on love and loss, and was very much shaped by Christian’s departure from his previous bands. Like his earlier work with Woods, the songwriting is earnest, and of course there are a few indulgent headphone tracks as well.

Now joined by stand-up drummer Patty Conway, Little Gold has begun to incorporate more improvisational and psychedelic sounds into their mellow, country-rock oeuvre, and in the process are becoming a notable live act around NYC.” (Bis Auf´s Messer) 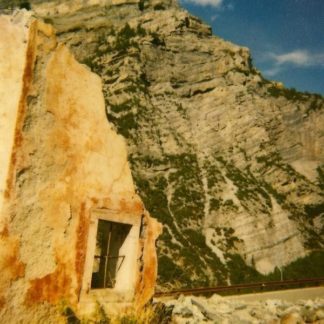