Charming new mini-album/EP from Hildegard Von Binge Drinking – not to be confused with the ancient German nun, musician, polymath and early feminist legend of (nearly) the same name.

“Charming new mini-album/EP from Hildegard Von Binge Drinking – not to be confused with the ancient German nun, musician, polymath and early feminist legend of (nearly) the same name.

This duo’s (Daniel Gehret and Matthius Labus’) sense of cosmic humour knows no bounds, with nearly all of their releases so far marketing themselves as pisstakes of kosmische classics. This ‘comic-osmische’, if you will, is a reflection of the pair’s critical relationship with the term “kraut”, which they describe as just a “lappish reference gauntlet” for their songs to bounce inspirations off of. Their earliest self-titled LP, to name an example, satirised Jean Michel-Jarre’s ‘Equinoxe’, depicting leagues of nuns on its cover, not to mention Kraftwerk’s ‘Tour De France’ being given a farcical run for its money in 2018.

But despite the knockoff album covers, the music on ‘Sprechfunk mit Toten’, as with their other releases, is wholly original, with nearly every track nailing a neat fusion of post-punky Berliner drums and indiscernibly vocoded voices. This new faux-parody of Ash Ra Tempel’s ‘Schwingungen’, recorded in Würzburg, again sounds like anything but the original album they’ve chosen to parody on the front. Opener ‘Dunkelheit und Licht’ (‘Darkness And Light’) refuses to mess about in its polyrhythmic and squeezy FM basses, while German uhs and ahhs populate the plodding burgeon. ‘Diät’ (‘Diet’) rides this high, keeping a comparatively regular and subdued pulse, but somehow reconciling punk shouts and whispers.

Honks – recorded by guest saxophonist Felix Floss but timbrally hitting on anything between a french horn and an accordion – dance hilariously across each track’s mix, never quite dominating their synthy backings (they’re keen to avoid anything too twee). ‘Angst’ is a slow-building drum solo into synth extravaganza, expositioning the 10” neatly into rapture. Riding this peak, runner-up ‘Orchideen’ (‘Orchids’) closes the EP off with an infectious four-note hook, wintry talkbox musings, and rippling Moog plucks.

… If any band can serve as our deus ex to bring about the demise of “kraut”, it’s Hildegard Von Binge Drinking.” (Juno Daily Blog) 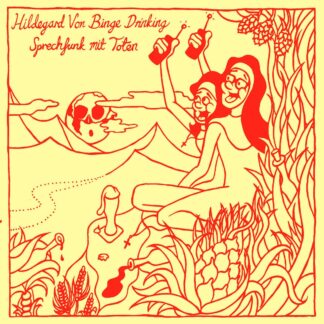